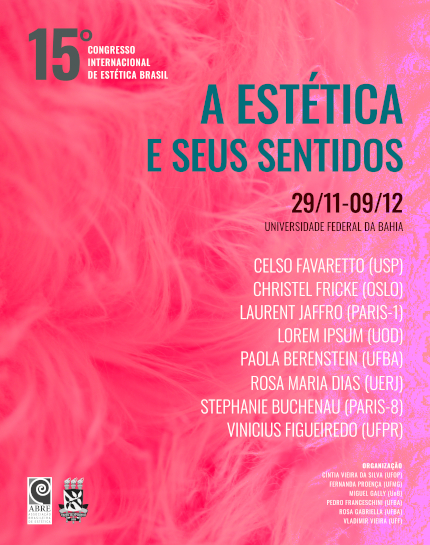 Since its advent in the 18th century, aesthetics seems to resist unequivocal definitions. As the designation of an autonomous philosophical discipline, the term Aesthetica was originally coined by Baumgarten to delimitate a science specific to the objects of the “inferior” faculties, those linked to sensibility– resonating the Greck etymology aisthēsis, relative to sensitive perception. More than the outcome of an isolate or authoral gesture, however, this new field was shaped through a series of theoretical and critical investigations on taste, beauty, and the arts, in a broad modern shift of increasing openness and recognition of those domains in subjective experience which were not easily reduced to a predominantly mathematical and analytical rationality and its paradigm of clarity and distinction. Whether as philosophy of the sensitive knowledge, philosophy of beauty, or philosophy of art, aesthetics is marked by the tension between the philosophical demand for universality and the singularity of objects and experiences irreducible to abstraction, thus giving it a rather heterogeneous, polysemic, and even undefinable character regarding its themes, problems, and meanings, particularly when contrasted with established philosophical disciplines such as theory of knowledge and ethics – whose boundaries, as a matter of fact, aesthetics continues to touch and bewilder.

In its intimate and original bond to sensitivity, aesthetics proposes, initially, a reexamination of the role of the senses, contrary to what prevailed in certain rationalist and idealist trends, where they were simply demoted as a source of error, ilusion and immorality. Conceived as the source of a specific knowledge, endowed with its own dignity, philosophy is then faced with a new evaluation of the sensorial organs and feelings, ranging from pleasure to imagination and memory, equally widening the possibilities of philosophical considerations on art, beauty, and similar phenomena. In addition, this sensitive experience, conceived aesthetically as an autonomous field, becomes also a place for the critique of traditional reason, allowing for a reconfiguration of philosophy.

Such broadening , however, indicates that this focus on the senses – on sensitivity – soon unveils itself to be only one of the possible senses – meanings – of aesthetics. Reflecting not only on the nature of taste and of the aesthetic pleasure, from the perspective of reception and the sensitive effects, it also turns to the investigation of creation, art criticism, and, more recently, curating, whereby the initial emphasis on the subjects and their feelings on beauty and the sublime, or their judgment of taste, opens up space for reflection on the sense or significance of art itself, and the artworks, not only justifying styles and specific genres but also the theoretical role of art as an institution.

Today, we can assume that aesthetics, as a philosophical discipline, comprises several aesthetics which can be associated with the philosophers who conceived them or the period in which they were conceived. In the 20th century, aesthetic theories were developed within many intellectual traditions, as diverse as phenomenology, semiotics, structuralism, hermeneutics, analytical philosophy, Marxism, feminism, among others. At the same time, the term “aesthetics” has been brought to encompass a wide range of particular, cross-sectioned, and interdisciplinary questions. In contemporary debates, we perceive a decisive revival of the focus on sensibility and the senses in order to formulate and interpret new artistic experiences as well as to reorganize and question the links between aesthetics and politics, its connection to subjectivation processes, especially regarding issues related to the body, memory, identity, technology and (new) media.
With the aim of fostering the debate on issues concerning aesthetics, beginning with its own polysemy, the International Congress proposes to address some of these aspects, independently or through possible dialogues between them.